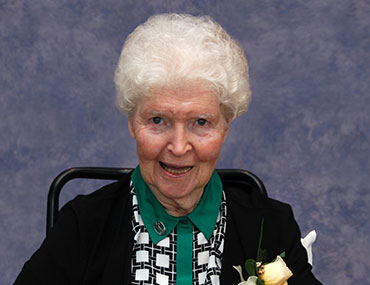 She will be lovingly missed by her sister, Rosemary McCabe, many nieces and nephews as well her dear friend Joanne and her Sisters in community.

Sister Jo grew up in Toronto where she attended St. Joseph’s College School and after graduation chose nursing as her profession, entering St. Joseph’s Hospital School of Nursing, Class of 1949. Four years later, Sister Jo answered her call to religious life and entered the Sisters of St. Joseph of Toronto, on September 8, 1953, where she became known as Sister Mary Herbert.

After further studies in theology, Sister Jo served in the ministry of Spiritual Direction and Retreat work for the next 15 years. In 2006, Sister Jo became a volunteer with several organizations, the last one being at “Becoming Neighbors” where she prayed for new Canadians.

During her time at St. Joseph’s Residence at 2 O’Connor, she was present to all, continuing to touch many people’s lives from her wheelchair, always with a smile on her face and a big hello.

Sister Jo’s love for the alumni of St. Joseph’s School of Nursing was evident as she attended their annual events and in turn her affection was returned as evidenced by the joyous reception she was given by her former students as she entered the room.

As a nurse herself, Sister Jo had a special affection for the nurses who cared for her at St. Joseph’s Residence and this was reciprocated by them. The most common words they used to describe her were: gracious, grateful and a woman with a beautiful soul.