We are ordinary women who live the Gospel in a manner that witnesses to God’s inclusive love. We do this by living a life in community committed to prayer and serving others “in any way of which woman is capable.”

If you are searching for a deeper meaning in life, desire to make a difference in the world and long for community, you may be experiencing a call to this way of life. 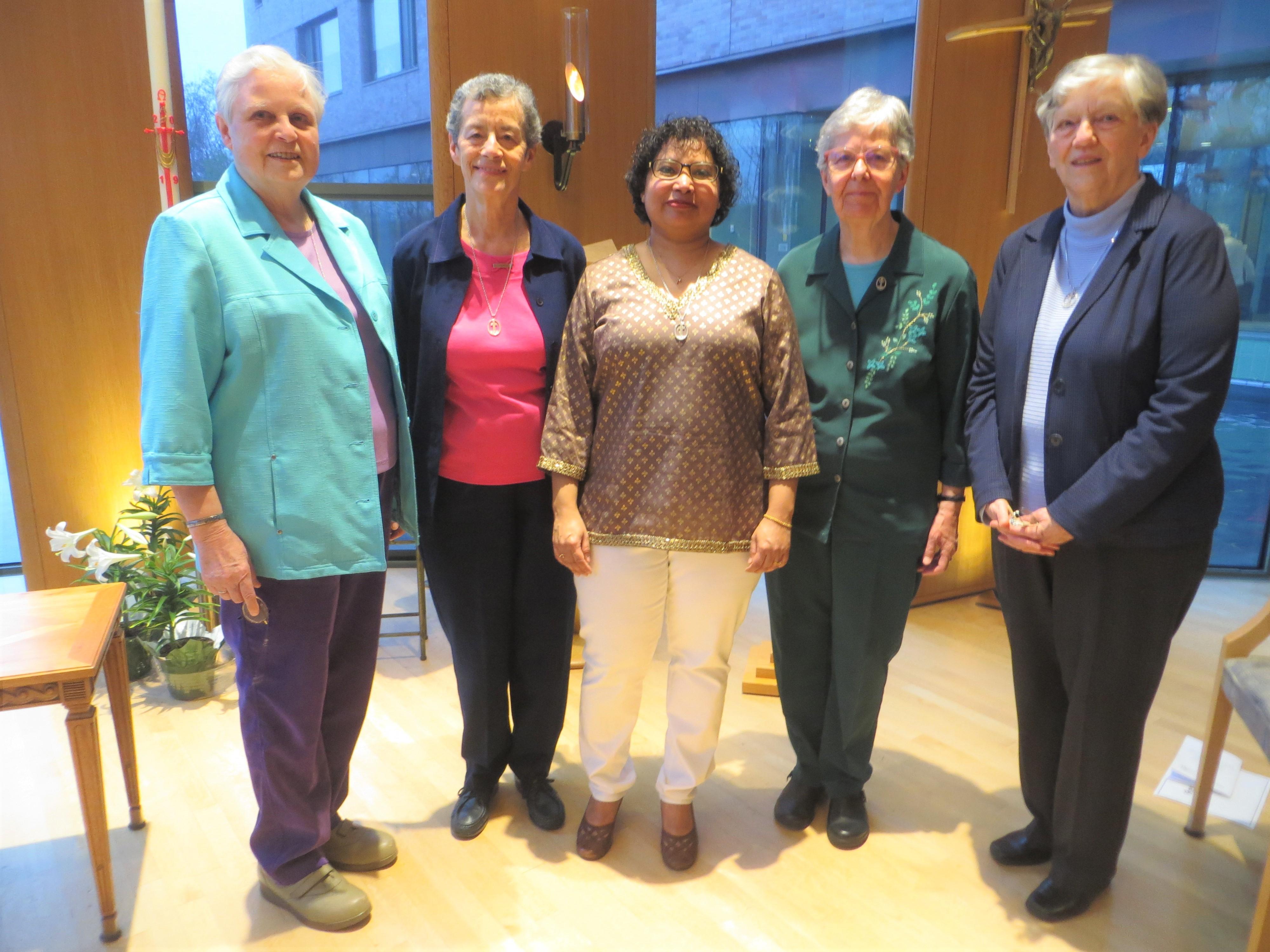 Inquiry - If you believe God is inviting you to explore the possibility of becoming a Sister, get in touch with the vocation director below.

Candidacy | 6 months - 2 years - A time for you and us to look at your desire and call to religious life.

Novitiate| 2 years - A time for you to deepen your relationship with God and the community through prayer, study and self-reflection. You continue to discern your desire for community life and vowed commitment and participate in apostolic activities.

First Profession | Usually 1 - 3 Years - Extendable to 6: You profess the vows of poverty, chastity and obedience.

Final Profession | Lifetime - Having lived these vows, you make a perpetual commitment to live them for the rest of your life.

Our God of mystery and wonder works in unconventional ways. I got my vocation call not in a church or a chapel but in a pub.

At the time, I worked in internet sales in the advertising industry. I travelled a lot. I owned a condo in one of the high-rise buildings on Toronto’s waterfront. I volunteered in my parish and neighbourhood. I had a great circle of friends and had an active social life. I had everything I’d ever dreamed about and so much more.

However, deep down I sensed that something was missing. I was not satisfied and there was a feeling of restlessness. I wanted more but I didn't know what that more was. The more accolades and promotions I got at work, the more restless I became. By then, I had started volunteering at the Out of the Cold program at St. Patrick’s Church. I also found myself attending theology talks in my parish and going to various young adult events organized by Ignite and Faith Connections.

It was at one of the Theology on Tap sessions where I first encountered the Sisters of St Joseph. I was chatting with Sister Rosemary Fry and I recall being fascinated by the Sisters because they were totally different from my preconceived notion of what a nun was. In the course of our conversation she asked me if I had thought about becoming a Sister. I burst out laughing and said "No, never. I’m not holy enough."

And it was true. It had never crossed my mind. Yes, I had priests and religious men and women in my family, but not once did I think about following in their footsteps. I considered myself to be a "Sunday Catholic" and not a prayerful pious person.

Sister Rosemary's question however gnawed at me and I couldn’t get it out of my mind. It would creep into my head at the most unexpected and often inconvenient times — on the subway, during a work meeting, or when I was out with my friends.

At church, I found myself getting emotional and moved to tears as I listened to some scripture reading, or certain parts of the Mass or even some hymn — things I’d heard all my life.

I always thought of myself as being level headed and in full control of my emotions, but now all of a sudden I was so emotional. I thought I had some deep psychological problem that was now surfacing.

I decided I needed professional help and started seeing a therapist.

I heard about a weekend retreat that the Sisters were offering and decided go. It was a way to re-connect with Sister Rosemary without being obvious. I later found out that she was the vocation director for the Sisters of St. Joseph of Toronto.

After the retreat, I continued to meet with her every month or so. I wanted to find out more about religious life and prove to myself that it was totally ridiculous to even entertain the idea. I knew I was definitely not cut out for religious life. After all I had a good life and a great career, I earned a good salary and I travelled wherever and whenever I wanted to. I did not want to give all that up. I prayed about it and asked God to help me figure out a way where I could serve God but still keep my job and lifestyle.

I began seeing a spiritual director who helped me recognize how God was acting in my life. I started seeking out Sisters in other congregations. I found I still had an inexplicable curiosity about religious life. I would regularly listen to A Nun’s Life podcasts as well as look up vocation stories on YouTube.

I started volunteering at Mustard Seed and In Good Company, ministries which were started by the Sisters of St. Joseph of Toronto.

Over the next few months, I continued to discern this attraction to religious life with my therapist and my spiritual director, as well as Sister Rosemary. I was able to talk through my doubts and fears. My family had sowed the seeds of my faith and they continued to encourage and support me while I was discerning.

After many more months, I told Sister Rosemary that I was ready to take another step. In November 2015, I was accepted as a candidate and moved into their formation house where I lived with five other Sisters. They welcomed me into their home and created a space for me in their lives.

I retained my day job and tried to find a balance between my work life, my social life and community life. On the weekends, I attended various events and community gatherings where I got to meet other Sisters.

The transition was surprisingly smooth and comfortable. I expected it to be bumpy because of differences in age, culture and lifestyle. Instead, I found the Sisters very progressive in their thinking and we shared the same core values, beliefs and opinions. Living with the Sisters gave me an opportunity to observe first-hand how each of them lived out the spirituality and charism of the Sisters of St. Joseph.

Every Sister I met was so full of joy and I wanted to share in that love and joy.

I spent a year and a half as a candidate during which I was able to discern together with the Sisters my call to religious life. In April 2017, I joined them as a novice. I spent time learning about the history, mission, spirituality and charism of the Sisters. I also spent time on church history and teaching, scripture and religious vows. Central to this time was self-reflection and prayer both as a community and by myself.

After two years of novitiate on May 1, 2019, the Feast of St Joseph the Worker, I professed for the first time the vows of celibacy, poverty and obedience for three years. After three years, I will renew my vows. And at the end of the renewal period, I will profess my vows for the final time.
Curious About Religious Life?

Here are some suggestions to get you started: