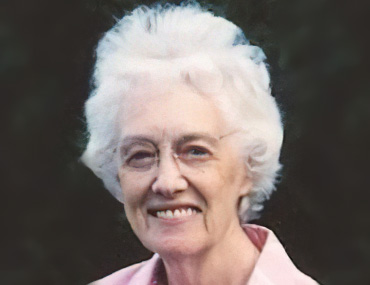 She is survived by her sister, Margaret Anne Reda (Larry), brother-in-law Ralph Van Ness from North Vancouver, and her brother Maurice Tremblay from Port Renfrew BC. She will be sadly missed by her family, friends and Sisters in Community.

Sister Marie entered the Congregation of the Sisters of St. Joseph from her home in North Vancouver BC. Her ministry as a sister began in the field of education. She taught in the elementary schools in St. Catharines and Toronto and then moved on to secondary school teaching for 29 years in Prince Rupert, Chilliwack, and Vancouver BC. In Ontario, Sister Marie taught in Barrie and Toronto. She earned her BA degree at UBC and her MA in English from the University of Toronto.

As she continued to teach, Sister Marie engaged in extracurricular work with the students, especially in oratorical and debating tournaments, in drama, and in social action clubs. Sister Marie participated in the Education Committee of the Canadian Catholic Organization for Development and Peace and in prison visitation with Toronto's Youth Corps. In 1975, Sister Marie visited India to express solidarity with people suffering extreme poverty and hunger. In 1981, she felt called to live more fully the gospel call, “When I was hungry you gave me to eat” (Matthew 25).

She founded the Toronto Daily Bread Food Bank which became incorporated as a registered charity in 1983. She had a lifelong passion about social justice issues.

Recently, Sister Marie was in residence at 2 O’Connor, where she continued to pray for the social needs of our world until her health failed in the past few months. She died peacefully surrounded by her Sisters.

In lieu of flowers, donations may be made to Fontbonne Ministries.